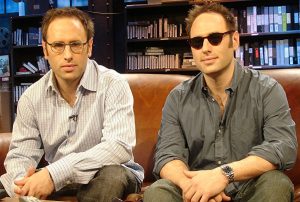 The comic twins, Randy and Jason Sklar, are probably best known for their ESPN show Cheap Seats and their podcasts Sklarbro Country and Dumb People Town. But these writer, actor, directors have appeared in everything from Entourage to Maron to Curb Your Enthusiasm to It’s Always Sunny in Philadelphia. They’re currently recurring on Tru Tv’s Those Who Can’t.

As stand-ups, they’ve had two Comedy Central half hour specials and they’re one hour special, What Are We Talking About? will premiere on Seeso in 2017.

Most importantly, they are both Dads who have very different parenting styles. Check out they’re stories and see what it’s like when your kid has to compete in sports against the child of a very famous NBA Player.

You can find them at SuperSklars.com.