These genius dads are my favorite single panel cartoonists since The Far Side. And as it turns out, they are some of my fave guests ever. I met them the day of the show and they are truly some of my funniest guests. Here’s a little backstory. Daniel and Jeremy Lehrer are identical twin cartoonists and comedy writers. They grew up in a large extended family in Los Angeles where the emphasis was on academic excellence, classical music, fine art, and other activities designed not to get them laid. 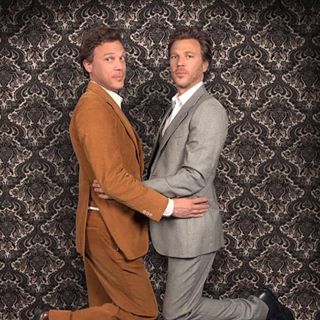 After respectively graduating from Columbia University and Columbia Law School, Jeremy became a small cog at a big corporate law firm, while Daniel became a small cog at Ducati Motorcycles in Bologna, Italy. They engaged in a half-decade of the usual post-graduation soul-crushing work, before deciding to “Voltron” together to pursue their dreams of drawing and writing. They are represented at CAA.

@lehrerboys, Daniel and Jeremy’s Instagram account, is inspired by their horrible childhood fights over the Sunday Funnies and who got to read The Far Side first.

They have created, sold, and developed numerous shows with studios including Fox, Adult Swim, Maker, and Amazon, and have been privileged to collaborate with talent like Paul Feig and Mila Kunis.

Check them out at lehrerboysshop.com.