Stevie D. is one of my favorite people in Hollywood. His upbeat positivity shines through in everything he does. Growing up in a small town in Kentucky required a lot of imagination for a kid to entertain himself. While other kids spent their days playing sports and doing homework, Stevie D. was creating mischief and dreaming of becoming a rock star. This could involve jumping trash cans in the middle of the street on his BMX bike (no helmet, of course), or perfecting the art of blow-drying his hair. Hey, he was the only boy in a house with a single mom and three sisters. He also spent a lot of time watching variety shows and secretly listening to Richard Pryor, which he would recite to the amusement of his friends at school (although their parents were not so amused).

After visiting Panama City Beach on a spring break, Stevie vowed to return there after high school and become a DJ, which is exactly what he did. Maybe he should’ve set his goals a little higher, but nonetheless, after achieving phase one, Stevie decided to make his next move. With two suitcases and a framed Elvis movie poster, he packed his car and headed to Hollywood.

Stevie knew there were two things he really wanted: muscles and to entertain people. Chippendales was out of the question, so after a few years of struggling, his sense of humor and perseverance eventually paid off – he was appearing in fitness videos and telling jokes on stage. Unlike a few of his friends, his misspent youth did not lead to a life of crime, and the dreams of becoming a rock star have somewhat come true. After more than a decade performing in the world’s most famous comedy clubs, Stevie executive produced and starred in Rockstars of Comedy, a live concert film starring some of the most recognizable comics in the business, including Whitney Cummings (NBC’s Whitney) and Steve Byrne (TBS’s Sullivan and Son). 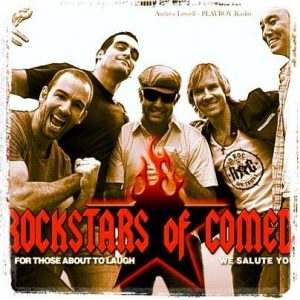 At age 44, Stevie was diagnosed with prostate cancer, which is usually associated with older men. After undergoing life-saving surgery, he decided to write a book about his experience, The Trans Am Diaries: A Hillbilly’s Road Trip from Stand Up Comedy to Cancer…and Back Again.

Stevie has appeared on television as a comic and host, interviewing some the biggest stars in Hollywood, before starting his own production company. He has created TV projects for OWN Network, with more in the works. However, Stevie says his greatest achievement has been that of being a husband and father. When he’s not conquering all media platforms, he’s busy teaching valuable life lessons to his two little rock stars – blow drying and jumping trash cans (with helmets)!

Find him  on Twitter and Instagram @Steviedrocks. And check out his show, The Stevie D. Show on ActorsEntertainment.com.