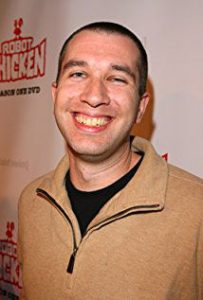 Today’s episode is for my nerd / parent listeners. Matthew Senreich, along with his partner Seth Green, are the Emmy award winning co-creators behind the wildly popular cult classic TV show, Robot Chicken. Since then, they’ve gone on to create Stoopid Buddy Studios and are making some of the best animated shows out there. Super Mansion, Buddy Thunderstruck, Titan Maximum and all the Robot Chicken: Star Wars shows are just a taste of what their studio is creating.

Matt is a true example of do what you love and create the job you want. He was a real comic book nerd who was at the forefront of the “comic book generation”. He started with a high school internship at Marvel, long before Marvel ruled the world of movies. And now his company is one of the big innovators in the world of comic based television.

He has a hilariously dark sense of humor which is even more wonderful when it’s combined with being a parent. Enjoy and please forgive us when we tell the story of the guy who masturbated with a belt sander and stapled his scrotum shut.