Jonathan Mangum was born in Charleston, S.C., but spent most of his youth in Mobile, Alabama. He attended college in Orlando, FL. where he began performing with SAK Theatre’s TheatreSports, a wildly successful local improv show. While performing 13 shows each week and attending college, Jonathan began to work with a tight-knit group of improvisers that included Wayne Brady. While in Orlando, Jonathan appeared on such shows as Clarissa Explains it All, Welcome Freshman, Fortune Hunter, and Seaquest DSV.

Soon after, Mangum moved to Los Angeles where he was joined by his Orlando improv troupe, later called The Houseful of Honkeys. The Honkeys performed their critically acclaimed improv game show, You Bet Your Honkey, at the ACME Theatre for nearly five years and went on to shoot several television pilots for ABC.  Around this time, Mangum appeared on Married…with Children, Just Shoot Me, and ER. Some time later, Wayne Brady asked Jonathan to join him on tour and he has been performing on the road with Wayne ever since, including a two year recent run in Las Vegas at the Venetian Hotel and Casino.

Mangum has been a series regular on Comedy Central’s Stripmall, The Wayne Brady Show (ABC), The Drew Carey Show (ABC), Trust Us with Your Life (ABC), Drew Carey’s Greenscreen Show (WB), and Drew Carey’s Improv-a-ganza (GSN). He has made notable appearances on Reno 911, Pushing Daisies, The Sarah Silverman Program, and NCIS. 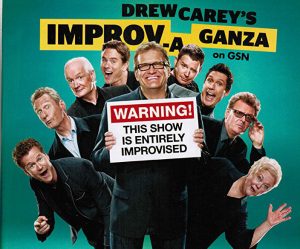 After two seasons on The Drew Carey Show, Drew invited Jonathan to join the Drew Carey Improv All-Stars. The group went on to tour in over sixty venues, including Carnegie Hall and currently does several yearly Las Vegas performances. Mangum has also toured with Ryan Stiles’ improv group, Whose Live is it, anyway? Working with Rob Reiner, Jonathan appeared with Jack Nicholson in The Bucket List and soon after appeared with Eddie Murphy in Imagine That.

Jonathan has also pursued writing, having written on The Wayne Brady Show and the award winning,  Brandon T. Jackson Show. He co-wrote and starred in VH-1’s spoof Home Purchasing Club as well as an award winning short film, Conversations. Recently, he wrote an animated short pilot for the Walt Disney Company entitled, The Lumberjacksons and continues to develop ideas for television and film.

Currently, Jonathan can be seen as the co-host of Let’s Make a Deal on CBS.

Jonathan is married to Leah Mangum, a casting director, with whom he has two boys.