John Preston is a Concore Entertainment recording artist and full time firefighter. John was a Marine Corps field wireman from 2000 to 2004, achieving the rank of Sergeant in his 4 years of service. He was with Second Battalion Seventh Marines (2/7) and served as a mission squad leader for 2/7 H&S running over 100 combat missions while in theatre.

John began his music career while in Iraq writing his song Good Good America, which became an overnight success, giving him his first shot at the music industry. He signed a record deal upon his return from Iraq. The song and video, inspired by Iraqi school children, was a national media topic and was viewed hundreds of thousands of times in 2004. 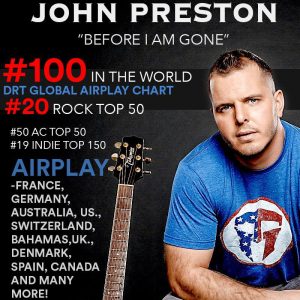 John returned to the music industry in 2014, signing with Pacific Records, and quickly released his first single this IS war in October of 2014. The song also became a national media topic when the Marine veteran made a call to action to veterans across the nation to stand against ISIS, which had just made a surge through Syria and Iraq. The music video had thousands of views and secured John a second release with Pacific Records.

Just one month later, John released his Los Angeles Music Awards nominated EP Your War is Over and again took to the media. This time the topic was very different. John and two Marine bandmates had released a veterans tribute album that he referred to as being “for us by us.” John highlighted veterans’ struggles with Post Traumatic Stress Disorder and suicide, and took the fight public with several TV and radio appearances across the United States. John and Pacific Records partnered with Boot Campaign and donated 30% of album sales to help combat PTSD. John and his band took to the road and raised thousands of dollars up and down the coast of California for several different veterans charities, all while never accepting any payment and giving all proceeds from the events back to the cause.

“We are taking our message to the public and today we tell the mainstream that we are here and we are loud. The perception of the broken veteran is a myth that we refuse to buy into. My music is about our lives and the real battles we have and continue to fight: on and off the battlefield. We are here to show our community and the general public our talent, work ethic, and drive to push forward through all adversity.”

Still receiving accolades and media for his Your War is Over EP, John took to the studio again and in September of 2015 released in the Top 100 New Alternative Albums chart with his second EP Day to Night. With this EP, John told the story of a Marine he was connected to that was killed on his last day of combat. Again, John took to the media continuing with his fight against PTSD, veteran suicide, and also reminding the people of America that the country was still at war. The album was released on the one year anniversary of the death of the Marine for whom he had written the song. John’s video for Day to Night has had hundreds of thousands of views. Rather than celebrate his success, John continued to play charity events and do media all over the country, becoming a national advocate against veteran suicide.

John’s life took a turn of tragic irony when, in January of 2016, John’s own brother fell victim to post traumatic stress and took his own life. The passing of his brother was enough to make him consider ending his career. Instead, it has fueled his hard work and passion, culminating in his new single superman falls on a compilation album titled Battlecry: Songs of America’s Heroes. Preston Executive produced the album and was the driving force which saw the album reach #21 on the iTunes rock charts, and continues to spread not only through the veteran community but the mainstream.

John signed with Concore Entertainment/ Universal Music Group and his single before I am gone started pre-release worldwide on September 5th, and will release October 17th with John donating 100% of his sales profit to Stop Soldier Suicide.