Jo Koy has come a long way from his modest beginnings at a Las Vegas coffee house. As one of today’s vastly growing stand-up comedians, Koy sells-out comedy clubs & theaters across the nation with his infectious, explosive energy onstage. The comedian pulls inspiration from his family, specifically his son, that inspires humor across all boundaries. 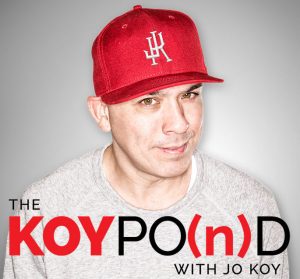 Koy, who was raised in Tacoma, WA, credits his mother for his comedic and acting talents. She encouraged him to participate in school talent shows and to hold impromptu performances for his family and friends. This loving support led to performances at a Las Vegas coffee house, and inspired a move to Los Angeles.

In 2005, Koy had the “opportunity of a lifetime,” when he performed on The Tonight Show with Jay Leno. He became one of a select few comics to receive a standing ovation on the show.

Since then, Koy has had two highly-rated and successful comedy specials on Comedy Central, Don’t Make Him Angry and Lights Out. In 2017, Koy will be releasing his 3rd comedy special, Jo Koy: Live from Seattle as a Netflix Original on March 28th world-wide.

Today, the comedian tours across the nation, and can be heard as a weekly guest on the popular podcast, The Adam Carolla Show. Koy recently joined the Podcast One family and host’s the weekly podcast, The Koy Pond. For more info on the podcast and tour dates, please visit: JoKoy.com.

Jo’s honesty about his upbringing and his kids is not only hilarious but inspiring to all parents out there. I’m really excited for everyone to hear this one.