Bert Kreischer is a force of nature. One of the biggest comedians working today, he is well known from his Travel Channel show, Bert the Conqueror, his many late night appearances, his special, The Machine… but did you know, he spent six a half years at Florida State University? 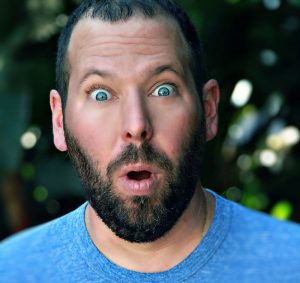 In 1997, Rolling Stone Magazine published The Undergraduate, a 6-page article about Bert. Rolling Stone named Bert the “Number One Partier in the Nation.” Oliver Stone optioned the rights to his life, book deals were offered, and a local Florida radio station put together a comedy showcase with Bert as the headliner.

He then decided to move to New York, to begin a career in comedy. Within the next five months he was offered a sitcom deal with Will Smith’s production company, Overbrook Entertainment. A year later he signed his second television development deal with CBS, where he made his acting debut starring in the CBS/20th Century Fox pilot, Life with David J, with Elliot Gould.

Bert has also appeared on Comedy Central’s Premium Blend, VH-1’s Nevermind the Buzzcocks, and as host of FX’s The X-Show. On the X-Show his segment, “Hurt Bert” was awarded Talk Soup’s “Clip of the Year”, and has now been developed into his Current TV show of the same name. Check him out on his own website, BertBertBert.com.