Andy Bell is a former Professional Motocross / Supercross Racer and FMX Rider who is most well known for being part of the Nitro Circus Crew. Andy is the master of performing unthinkable stunts and making them look easy. From collecting multiple Guinness Book World Records to winning national level car races, backflipping Big Wheels to getting blown up in a car with a certified madman, Andy Bell never shies away from a challenging task. He loves instigating his close friend and arch nemesis Travis Pastrana, as well as the rest of the Nitro Circus Crew. He is constantly egging them all into performing impossible feats. In addition to his big mouth, Andy’s got even bigger skills to back up any challenge and, more often than not, ends up taking Travis down – which never goes over well! 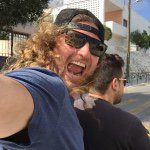 A natural athlete with an extensive motorcycle background, Andy is no stranger to riding on two wheels. The first ever “factory sponsored” FMX athlete in the world (KTM), Andy rode FMX professionally from 1998 – 2006, ranking top 10 in the world for 3 years and winning the Canadian FMX Championship in 2001. Before that, he raced motocross professionally from 1991 – 1997 and was ranked top 10 in Canada for 4 years. He has appeared in over 30 motocross movies.

Andy has extensive experience and has performed choreographed stunts in motorcycle jumping, car jumping, car racing, downhill skiing, scuba diving, high falls / blobbing, Sea Dooing, bull riding, Harley jumping, and many more. On top of his mastery of the stunt world, Bell also is a very experienced television host and personality, hosting everything from Live MTV series (MTV’s Ultimate Parkour Challenge) and Red Bull X Fighters World Tour, to emceeing live action events around the world. A talented rider, unbelievable stuntman, master of stupid tricks, accomplished TV Host, and a successful brand marketer, Andy has all the tools necessary for a successful partnership with any company. Check him out at Andy Bell Stunts.

Andy is also now the proud Dad to 2 beautiful children and runs his own production company, Sweatpants Media. Follow his insanity on Twitter and Instagram @andybell.