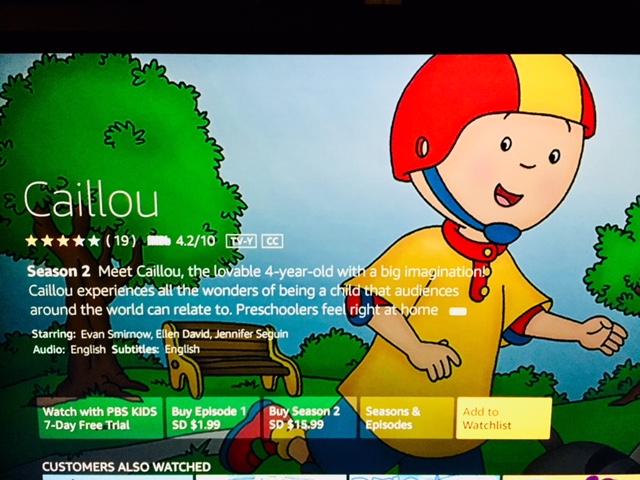 Ask your parent-friends what they think about Caillou and answers will range from “eh, I don’t really like him” to “Caillou is the Anti-Christ!” Forget finding anyone who enjoys Caillou; I’ve never even met a a neutral party.

In the parenting world he is unanimously loathed. And yet, there’s one episode I keep saved on my DVR, preserved for all time (or at least until our kids move out).

For the uninitiated, Caillou is a children’s television show that aired intermittently from 1997 to 2010. It’s a Canadian export, ranking somewhere between Moosehead Beer and Nickelback. My kids, and probably your kids, have seen re-reruns on PBS. But, hey, there are a lot of kids’ shows on PBS, not to mention Nick Jr., and Disney Jr. Why then, is Caillou so universally reviled?

Because Caillou is a brat. He’s a jerk. He’s a whiner. He’s spoiled. And his soulless parents aren’t just enablers, they’re Stepford-parents, obviously numbed to Caillou’s egregious escapades by a potent combination of Valium and vodka.

Visually, the Caillou character is easily compared to Charlie Brown. But Charlie Brown (of The Peanuts fame) is from a children’s show that feels like it’s written by philosophers, theologians and child development therapists. Caillou, meanwhile, feels like a children’s show written by other children. Or worse, by people who hate children, but are feigning interest in the child-rearing process so they can cash their PBS residuals checks.

To be fair, you can find someone, somewhere to see something wrong with every animated kids’ show. Peppa Pig, P.J. Masks and Hey Duggee all have their critics. But everyone, absolutely everyone, agrees: there is nothing redeeming about Caillou.

Put another way, if my daughters don’t obsessively watch Caillou, then you know something is rotten in the state of Quebec.

By now you’re wondering why any episode would be worth watching. As much as I hate to admit it, there is one diamond in Caillou’s rough. It’s the third segment in Season 5, Episode 9. Much like the Star Wars prequels, you can zip through the first two segments. We’re angling for the last segment, titled “The Untidy Room.”

Spoiler alert, and you’ll be shocked to find out, Caillou doesn’t like cleaning up his toys. Something he conveys rather directly to his teacher, Miss Martin. But unlike Caillou’s parents, Miss Martin is a shrewd cookie. She slyly accommodates Caillou, telling him they’ll try an experiment. She gives permission for Caillou and his classmates to not tidy up for a few days, “just to see how it goes.”

At first Caillou is elated. Bringing his new found libertarianism home to his mother, he declares he’s not cleaning up his bedroom either. She’s clearly fine with this as long as his antics don’t get in the way of her bottle of cooking sherry scurried away in the breakfast nook. Caillou’s dad, of course, is nowhere to be found. Presumably, he’s down the street, at the bowling alley bar, nursing a three-dollar gin & tonic.

So far this is a pretty normal sequence of events for Caillou, him getting away with murder and all. But for once, little by little, Caillou faces the consequences of his actions. His bedroom and his classroom have become so messy that neither he nor any of his friends can find their toys. Every car, robot, and crayon is buried under a pile of blocks, dolls, and clothes. When Caillou and his pals want to play with clay, they find it all dried up because they’ve left it out overnight. (I really wanted Caillou to give us a Simpson-esque “Play-Doh!”) The lesson really hits home for Caillou when his prized dinosaur toy gets broken into a million plastic fossils. Miracle of miracles, Caillou finally concedes to tidy up his toys, both at school and at home.

Why is this an important moment? Because I’m tired of bandaging up Lego punctures in my bare feet after pre-dawn saunters to the bathroom. Because I’m tired of sorting out mixed-up puzzle pieces like I’m Rain Man. And I’m tired of getting scolded by three-year-olds for daring to put P.J. Masks crap in the same toy bin with the Paw Patrol crap.

So now, when our family begins to wind down for the night, I admonish my girls to “remember what happened to Caillou’s toys.” Which is the toddler equivalent of “Remember the Alamo.” And my girls know by now, if I’m invoking Caillou’s name, sh*t is about to get real. But my girls aren’t stupid either, so I have to change up how I invoke the Caillou doctrine, tweaking it each time, so it’s fresh.

Feel free to borrow these variations for your own purposes:
“No one’s getting desert until all these toys are tidied up, just like on Caillou.”
“Maybe we don’t need to buy any more toys if you’re just going to treat them like Caillou did.”
“You better clean up this mess or I’m going to Clockwork-Orange your eyes in front of a Caillou marathon.”

Okay, I made that last one up. But you get the idea. And so do my girls.

Caillou may be the Canadian Anti-Christ, but for ten fleeting minutes he managed to convey a practical real-world lesson. In the long run, it’s better to tidy up your toys, so you can spend even more time enjoying them. I’ll take that teachable moment anywhere I can get it. Even from that rat bastard Caillou.

Mike Beatrice is a Bostonian living in Hollywood. He's written for Playboy TV, TheStream.tv, SchmoesKnow.com, and is a regular contributor here at The DadLands. He and his wife raise two toddler girls, two dogs, and a dozen chickens.

How to (barely) survive a remodel with kids

A different kind of Christmas Story