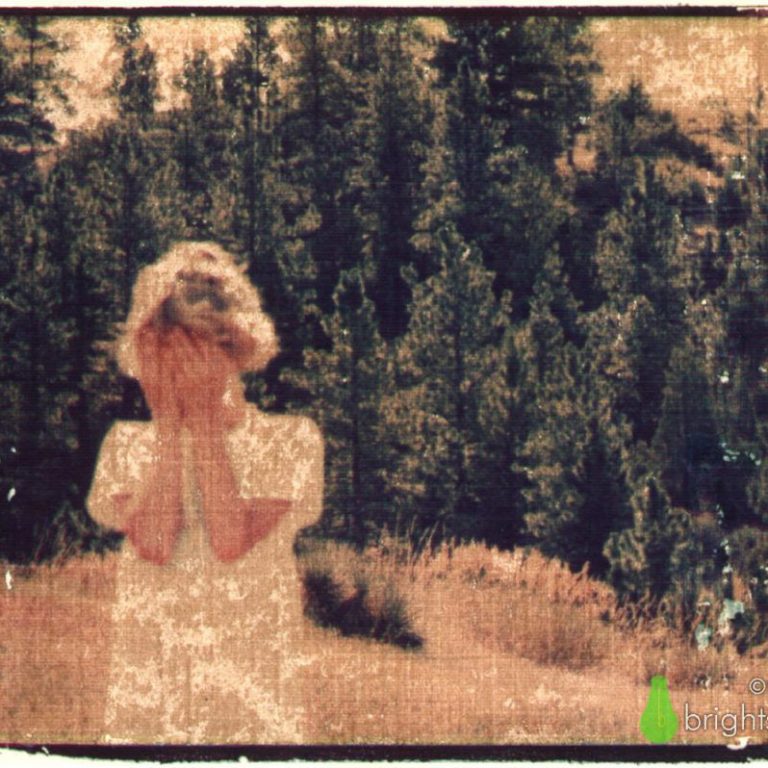 As soon as my daughter was born, I was overwhelmed with the feeling of wanting to keep her safe. Every object seemed a potential hazard, every situation a possible threat.

Even our baby-proofed house never seemed quite baby-proofed enough. As she learned to crawl, the lurking dangers seemed even more unpredictable, and once she was walking the world seemed full of sharp objects at exactly toddler-head height.

Having no siblings, she was quite content to play on her own when she tired of mom and dad. She was creative, so she would patiently draw, color, sculpt, or build. But any parent knows that even though it’s nice when your child is quiet, danger lurks when they are too quiet for too long. 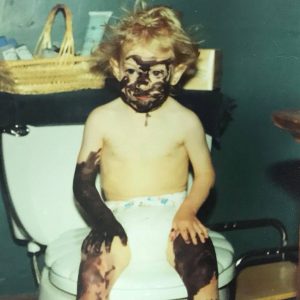 Such was the case in the accompanying photograph. Her child-safe crayons and markers were just not doing it for her, so she found a black, permanent magic marker to draw with. And, let’s face it, drawing on paper just isn’t that interesting once you’re over a year old. That’s for babies! So why not see how this thing works on flesh. Turns out, it works great!

When I discovered her “creation” I gasped, then slightly panicked, then laughed. I was relieved she didn’t get into something that was actually harmful, and felt guilty that I could leave her unsupervised long enough to cover half of her limbs and face with permanent ink. I snapped this picture just before putting her in the tub. Besides soap and water, we also tried peanut butter, vegetable oil, and various other gentle concoctions to try and remove the ink. This happened pre-world wide web, so I couldn’t just Google for possible solutions.

The best we could do was turn the black stained skin to purple-blue. For the next couple weeks, any public appearance was met with suspicious glances, and sometimes questions, as people saw what appeared to be a sweet two year old covered in massive bruises. Long pants and long-sleeved shirts helped, but I thought making her wear a ski mask or balaclava would have presented a whole new set of questions. I half-expected an anonymous tip would result in a visit from Child Protective Services.

A couple years later, she was playing in her plastic playhouse in the back yard as I did dishes and other tasks in the house. She was never out of sight, as the kitchen and office both had generous windows and doors that opened onto the back deck. She would happily bounce into the house and grab a toy or stuffed animal, and bounce back out to the playhouse. As the playhouse wasn’t enclosed, she was never out of my sight. Or so I thought.

I sat down in the office to take a breath and looked out to see her happily coming back into the house, I thought to grab another favorite toy. Instead she was bringing me something. “Here, Daddy!” she said. I put out my hand and she dropped a handful of fine, curly hair into it, then dropped a pair of scissors on top. I stared at the curly locks, trying to figure out which of her stuffed animals she had shorn. And when did she sneak scissors out there? When I looked at her face, it seemed much rounder than usual, her forehead much more prominent. I was holding her bangs in my hand. She had chopped her own hair right down to the scalp.

The familiar gasp/panic/laughter/guilt cycle engaged once again. Her mother wasn’t home at the time, so my panic and guilt was compounded by knowing I had to explain how I could have been so inattentive. Fortunately, after her mom’s initial panic subsided, I managed to circumvent any over-reaction by asking, “How old were you when you first chopped your hair off?” She answered, “Four.” We were both able to just take it in stride. It would grow out.

I don’t want it to sound like every crisis ended up being harmless.

There was the split lip at five from when she decided to stand on the bathroom sink and try to look over the top of the shower curtain to see how the bathtub looked from an aerial view. She didn’t understand that a shower curtain rod was only meant to support the weight of a shower curtain, and not an entire kindergartner. She tumbled headlong into the tub resulting in a massive wound to her lower lip. Despite immediate medical attention, it got dangerously infected, resulting in a multiple day hospital stay and a scar and slight deformity she bears to this day.

Then there was the leap she took from her swing set, straight into a low hanging branch, a small portion of which punctured her scalp, necessitating another ER visit. There was another split lip when she misjudged a leap on her monkey bars. A broken finger when a friend accidentally stepped on it. Uncountable scrapes, cuts, bruises, contusions, and a bee sting. Not to mention non-injury ailments and health issues, some of which she wrestles with to this day.

When she started going out with friends or on dates as a teenager, I couldn’t help but worry about her until she got home. But somehow she survived, graduated from high school, and went off to college.

Much has already been said about how American parents are now more protective than ever. I was raised in one of the roughest areas of Detroit, and my siblings and I were out of sight of our parents for hours at a time, our only restrictions being to be careful and be home in time for dinner.

Yet in the very safe Montana neighborhood I raised my daughter in, I wanted eyes on her at all times. When she was a teenager, I made sure she had a cell phone with her whenever she left home. Of course we should be vigilant to protect our children, but we can’t have total control and protect them from everything all the time. But we have every right to worry about them.

After she graduated from high school, she went to the University of Montana in Missoula, about a five hour drive from Billings. On our visit there for orientation, she sat in the common area to look over some of the material. I stepped away to look around, and when I came back I took this photograph:

I couldn’t help but feel the scene was a metaphor for my feelings at that moment. She’s a tiny girl, just a child in my eyes, in danger of being overwhelmed by the world around her. The points of the greenery seemed to be daggers and arrows aimed in her direction. But she was oblivious and unconcerned, going about her business of growing up.

She doesn’t color her own skin anymore, but pays others to do it in the form of tattoos. She doesn’t randomly cut off her bangs to the scalp anymore, but she buzz cuts the sides, and colors it a bright green. And when she’s quiet and alone, she’s usually creating hand-painted and digital art.

I’m glad her technique is more refined now, and it makes me feel slightly less guilty for my moments of inattention. Every artist needs freedom to experiment.