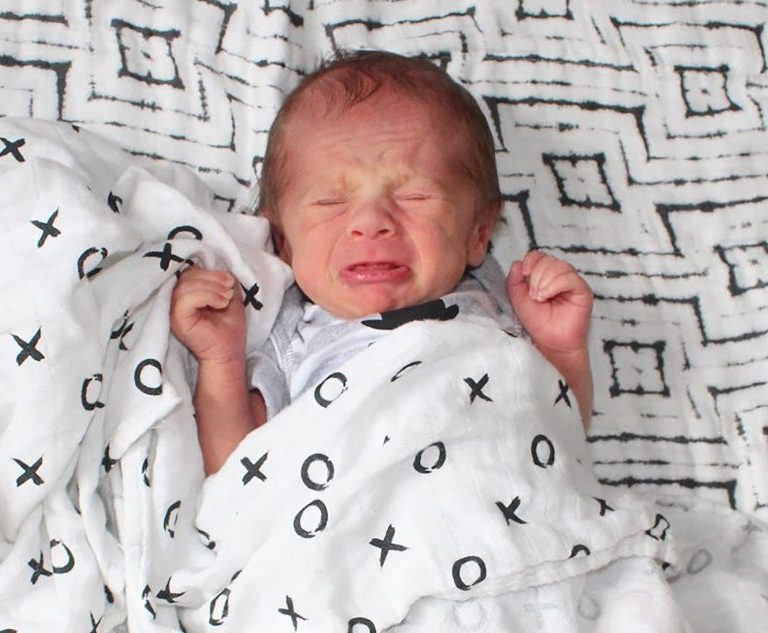 My baby had colic, and one thing was obvious: she stopped crying, and even fell asleep when I held her and walked with her.

It wasn’t long after bringing our baby daughter home that we realized she needed a lot of attention. As new parents, we thought we were prepared for how much work a newborn would be. But was this… normal? She seemed to only be content when being held, walked, rocked, or all three at once. She would fall asleep in my arms, but suddenly jolt awake, crying, as soon as she was placed in her crib.

The word “colic” started getting thrown around, first by experienced parents, and then by her pediatrician. I think the formal, medical definition of “colic” is “an evil spirit in your baby whose purpose is to systematically test every bit of your mental and physical endurance and make you realize that you may never have another moment of peace in your life, unless you are holding and walking with the equivalent of a sack of potatoes in your arms.”

That may not be exactly right (I’m no doctor) but I think it’s close.

As a new dad, I was very appreciative of more experienced parents sharing their opinions and advice with me. Until I wasn’t. I knew I didn’t know anything, but I became convinced that even parents with many children didn’t know anything either. It was as if I was wearing a sign that said “Give me unsolicited advice about parenting that does not work in my situation.”

We heard a LOT of opinions. “Don’t pick her up every time she cries, you’ll spoil her and she’ll never stop!” I pictured myself at 70 years old, carrying my 42-year-old daughter around so she wouldn’t cry. Or, “Of course you should hold her when she cries, she needs comfort!” “Is she hungry? Does she need to burp or poop? Is it just gas?”

Yes, all the normal things were accounted for. She was colicky. This isn’t a medical blog, so I’ll let you Google (or not) the theories about colic. But whatever was going on, one thing was obvious: she stopped crying, and even fell asleep when I held her and walked with her.

Her favorite location for these walks was the dining room. It was a large room, decorated in somewhat gaudy Victorian style, suitable to the age of the house. The wallpaper was very busy, and the walls were adorned with various shiny, gaudy decorations: sconces, mirrored shelves, pictures framed in gold leaf. Walking in circles around the dining table, she would watch the gaudy scenery pass by. It had a hypnotic effect. Her eyes would grow heavy and she’d fall asleep. I’d wait a while before putting her in her crib. About half the time she’d immediately re-awaken, and the routine would start again. This happened numerous times, day or night. I also learned to eat my meals one-handed while holding her and rocking or standing by the table.

Holding/rocking/walking with your baby girl is a sweet, special thing. No question. It’s also very boring. So I started playing music. One of my favorite albums then and now is Stop Making Sense by Talking Heads, the live recording that complements the excellent concert film of the same name. I’d put the CD into my stereo (or my Sony Discman if I didn’t want to disturb others) and carry her around the house walk-dancing to the infectious, joyous beat. Sure, there’s some incongruity while dancing with my innocent baby to the opening number Psycho Killer, or the allusions to nuclear annihilation in Burning Down the House or Swamp. But, to quote a cliche that will be familiar to those of us of a certain age: “It’s got a good beat and you can dance to it.”

At some point, seemingly hundreds of years later, the colic subsided. She was no longer miserable when not being held. But I was somewhat miserable when not holding her. Cranking up Stop Making Sense and dancing around the house became a regular occurrence. A ritual. A habit. Maybe even a sacrament. As she got older, she would mimic the hand motions I had unconsciously added to the “dance” routine. As she learned to walk, she’d come up to me, holding both arms in the air to be picked up. I knew she wanted the music. As she learned to talk, she’d reach up and say “Dancing! Dancing!” And she’d sing along, correct lyrics be damned. It was always Stop Making Sense.

She never became “too big to hold” and now at 28 is still probably light enough. At some point the holding lessened, but the dancing continued. Sometimes it migrated to the car when I drove her to school. When she was about 9 or 10, the home video version of Stop Making Sense was released. We’d play it on the big 27 inch television and try to keep up with David Byrne’s sometimes frenetic movements. Try it some day. It’s quite a workout!

One of the highlights of the concert film is the song Life During Wartime, during which David Byrne “dances” as if he’s made of rubber, jogs in place to the beat, then breaks out into a full-out run, doing several laps around the rest of the band. I always feel better about my lack of dancing skill when I watch David Byrne. Odd movements, jogging in place, falling down, running, looking goofy… these are all things I can do! The chorus of Life During Wartime contains the well-known refrain “This ain’t no party, this ain’t no disco, this ain’t no foolin’ around!”

Those words might seem to be a perfect description of parenthood. Except sometimes it is kind of a party, and kind of a disco, if you want it to be.

My now-grown daughter bears a tattoo on her arm, one of about a dozen or so, with those lyrics. Now, that ain’t no foolin’ around!