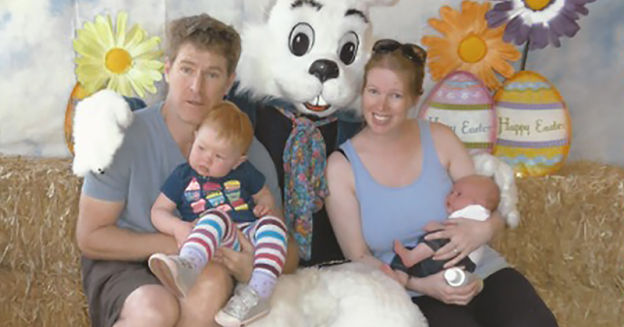 Ahhhh, the famous slogan that, although an outright lie, has been used since the beginning of time to break up with people in the nicest way possible. But is it a lie? Now that I’m married, I’ve come to realize that statement was actually more true than we ever imagined. My single friends will complain that they can’t find the right person and I always have the same answer:

In India, arranged marriages are the norm and yet they have a lower divorce rate than the good old U.S. of A.. How can that be? They didn’t even get to pick their spouse. Well, they did it the same way our parents did in the last generation. They made it work.

Marriage isn’t easy, and parenting is even harder. Last night, my wife reminded me that all of her friends told her not to marry me. Full disclosure, she is still breastfeeding and we have two kids under the age of two, so she can’t really be held accountable for the words that come out of her mouth at any particular moment. And, I’m not even sure what it was in reference to? I may not have loaded the dishwasher properly? I may not be living up to my potential? Or maybe it’s just the fact that I’ve been wearing the same beaten-up flannel shirt for the better part of 15 years?

Whatever it was, I understood that she was having a bad day. My wife and I have fights like everyone else, but at the end of the day, we’re committed to each other and our kids. Divorce isn’t even an option.

I’m a little dismayed by all the people I know who are getting divorced. We live in this world of privilege and greed and getting everything we want right now, with no money down. Immediate gratification combined with a short attention span has spawned a generation that believes playing the lottery counts as a retirement plan.

I wonder how families survived throughout history with kids who had no television and a single toy train that was whittled from a log. But I digress.

The point is that people who have never been married don’t understand the work that’s involved with keeping this institution afloat. With all the online dating websites, you can search and search for that perfect person who “completes you” but the truth is … they don’t exist. You need to complete yourself, and then find someone to share your life with.

Because the truth is, we’re all crazy. Me, as much as most. I’m emotionally stunted. I cut people off when they’re talking. I eat food off the ground without hesitation. I play guitar on the toilet. Yes, every day. Right after my coffee and Go Lean Crunch. People who come to the house always ask the same question: “Why is there a guitar next to the toilet?” And then my wife cringes.

But when you’re first dating, everyone is so careful to only reveal the best version of themselves. Don’t text back too soon or you’ll look needy. Don’t share the story of that time you got arrested. Maybe not mention you’re $50,000 in debt.

And whether it’s saying the dreaded, “I Love You” too early, or letting someone meet your creepy uncle, or putting ketchup on a hot dog when mustard is the obvious choice, we’re all guilty of banishing someone early on, for the smallest of eccentricities. Reminding that person with the strongest of conviction, that it is surely not them, but you who needs some alone time just to work on yourself.

Let me give you a very specific example of one time this happened during my dating days:

I started seeing this girl in New York. And we really hit it off. The first time she spent the night with me, I was staying in the SoHo Grand. It was amazing. I really liked her and thought to myself that this girl and I could have a future. In the morning, I had to go to work, so I told her to order room service and leave when she wanted and I would call her in the afternoon.

When I got downstairs, I realized I forgot my sunglasses and headed back upstairs to find her in the shower. I went to grab my glasses on the bedside table and saw the hotel stationary. On it was written this girl’s first name…with my last name!

What?!?! Crazy, right? I had been gone ten minutes!!! And this girl was already planning our wedding. “We’ve got a stage five clinger. Abort, Abort, Abort!!!” And here’s the kicker! Below it was written, “Hannah Elizabeth Kaler.”

She was already naming our children. This was the first time we had ever spent the night together. It felt like the opening scene of an episode of Forensic Files and my body had been found in some trash bags in a Memphis landfill.

I sat on the edge of the bed with my patented shit-eating grin and waited for her to get out of the shower. She emerged from the bathroom, shocked to see me.

“What happened? Did you forget something?”

“I did. Yes,” I said, holding up the paper. “I forgot my daughter, Hannah Elizabeth Kaler. Have you seen her?”

She almost fell to her knees.

Her voice trailed off knowing there was no way out of this mess. She was mortified. Near tears. Her cards had been played way too early and she knew the game was over. How many people slip through our nets because we saw their true self way too soon?

I actually ended up dating that girl for a while. Yes, I knew she was a little crazy, but I liked her and I was old enough to not care at the time. I’d been around the “crazy block” a couple of times and knew that nobody bats a thousand. We actually dated for around two years. Right up until the point where we got married.

And yes, my wife Kate Kaler had a daughter as our first child, the name choice was actually pretty simple. Hannah Elizabeth Kaler.