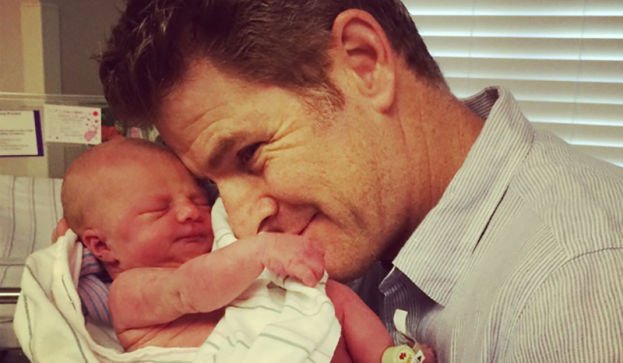 As a stand-up comic and actor, you learn to take your jobs when they come. You never know when the next one will be. So, when I was offered a one-night gig for a company’s charity event in Omaha, Nebraska, one full month before our second baby was due, my wife and I asked ourselves, “What are the chances?”

After all, I would only be gone for 24 hours. Corporate shows pay really well. And the odds of the baby being born during this time were exactly…  one hundred percent.

In my father’s day, the man’s presence in the operating room for the actual birth was not only not required, but not welcome.

“Wait a second,” you’re thinking. “Is this guy really going to miss the birth of his child to tell jokes to a bunch of insurance salesman in the Midwest?” That does seem like a cardinal sin these days, doesn’t it? When professional baseball players are missing games for paternity leave, you know times have changed.

In my father’s day, the man’s presence in the operating room for the actual birth was not only not required, but not welcome. My father didn’t watch any of his six children come into this world. No man was supposed to see that. That was the woman’s burden. It was a different era.

In a full suit and tie, he smoked a carton of cigarettes and paced around a waiting room with all the other prospective dads. They waited patiently for a doctor to walk out of those double doors and announce, “It’s a boy!” Handshakes, congratulations, and cigars would be exchanged, and then it was back to the golf course. Ahhh, those were the days. Cue Frank Sinatra music.

And then something happened. Maybe women decided that since men were to blame for their predicament, they should have to witness just how hard it is for someone to have another human being come out of their body. Whatever the case, missing the birth of your child is now considered an unforgivable offense. But, before you pass judgment, let’s remember this is my second kid.

Watching a birth seemed simple enough, but like war, you can never really tell how you’re going to react until that first bullet whizzes past your head.

I was there for the birth of my first child, and yes, I was a nervous wreck. I was terrified that I would pass out. I had nothing to base this on except for the fact that I didn’t like the sight of blood and had blacked out one time when getting a series of shots for going overseas. After all, I had never seen an actual human birth. I’d seen tons of animal shows where the baby giraffe simply slides out, jumps to its feet, and immediately runs for its life. It seemed simple enough, but like war, you can never really tell how you’re going to react until that first bullet whizzes past your head.

As it turns out, I’m good at watching people be born. It was a wonderful experience my wife and I shared, as I watched her give birth to my first daughter, Hannah. I even cut the umbilical cord. So, as you can imagine, I was pretty excited to see the second one. It would be like riding a roller coaster that second time. You can really settle in, open your eyes, and enjoy the ride. Which is why, when I woke up that Sunday morning in Omaha and looked at my phone to see 27 messages from my wife, I was struck with an overwhelming sense of fear.

I immediately thought, “I missed it!”

You see, I had shut my ringer off during the stand-up show and never turned it back on. And my wife, in her panic, couldn’t remember my room number to call. And I know what you’re thinking, “Why wouldn’t she just call the hotel and give them your name”?

Well, apparently, the hotel I was in has a very strict policy of not allowing phone calls through to unapproved guests. Yeah, I never heard of that either. There must be a rash of the “women in labor” prank phone calls in Lincoln, Nebraska that needs to be stopped. I dialed her number as fast as I could, waiting for the expletives to come. It turns out, my wife’s water had broken minutes after I hung up with her the night before. Her friend, who luckily was staying the night, took her to the hospital. By the time she picked up my call, she was already in there and in labor.

“I’m heading to the airport. Do not give birth. I will be there in six hours.”

My wife said, “I’ll try to hold on but I don’t think our the baby is in the mood to wait.”

Now, if you think a trip to the airport tests your patience, try it when your wife is in the hospital, about to have your child. It was everything I could do not to scream at the line in security: “Pick it up people! I gotta get home to see my kid born!”

I finally get to the gate and FaceTime my wife. The news is bleak. The baby is coming. I’m not going to make it home in time. The only question left was whether to change my flight, so I can watch the birth on my phone. It’s a tricky scenario: I want to see the birth, but I want to get home as soon as possible.

“Baby, my flight is boarding right now so if you can go ahead and give birth, that would be great.”

Thirty minutes until take-off. I line up in my spot, A-32. Everyone looks at me like I’m that self-important jerk on my phone in line. Right up until I turn the phone towards them and yell, “My wife is giving birth … right now.” They look at the screen, wonder whether they’re involved in a prank show, and turn away.

Then comes the announcement. My flight is boarding. I pass the news along to my wife.

“Baby, my flight is boarding right now so if you can go ahead and give birth, that would be great.”

My wife responds, “Are you an idiot? Do you even know how this works. Sometimes I wonder…”

I hear the doctor chime in, “Here she comes!” I hear the gate attendant, “Your ticket please.”

Then I hear my daughter, Claire, who apparently has been given the gift of impeccable timing, “Waaaaaaaaaaaaaa.” The doctor holds her up to the camera. I start to tear up as I wave to my phone.

Perhaps she had seen this scenario a million times but her tone didn’t have the requisite excitement that I was looking for. I hand her my pass and amble down the jet way.

As I settle into my seat, the proud father of two girls, the smile on my face starts to fade as I can hear their future arguments in my head.

“Dad loves me more because he was at my birth,” says Hannah.

“Dad had to be there because you can’t do anything by yourself,” replies Claire.