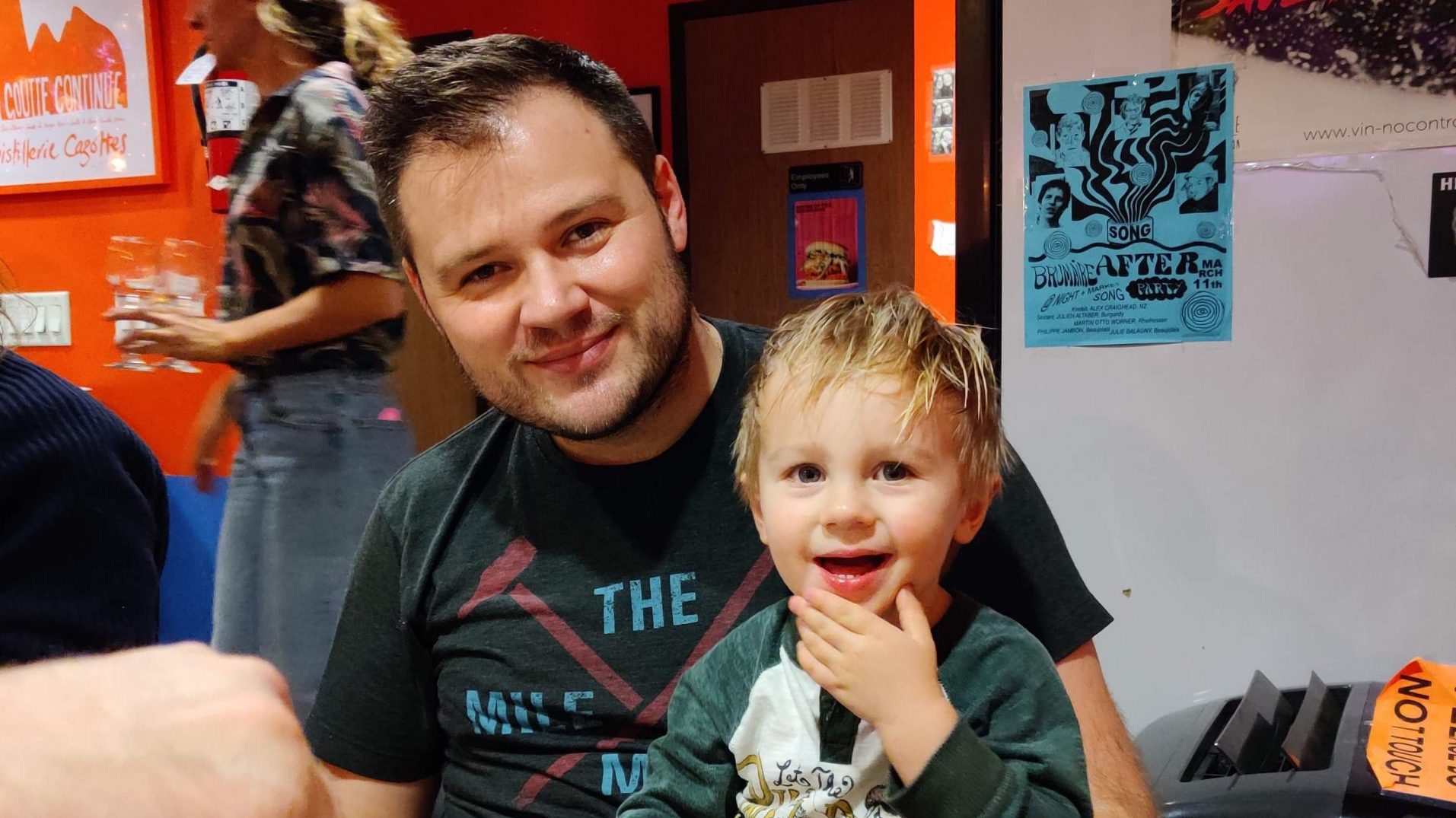 Working out is great, if you’re into that sort of thing

I don’t think I’m alone in this. You get into your thirties, your life gets filled up with work and bills and family, your metabolism slows down, you start having more cookies and chips around the house “for the kids”, and one day you turn around and BOOM! Twenty extra pounds (going on twenty-five) right on the belly.

I am not a person that regularly struggled with weight. I realize there are varying degrees of this. Some folks fight it from the start. Some for stretches. If you’re like me, it just feels like it grabbed a hold of you one day, and you can’t really pinpoint that day, but it hasn’t let go since. And now I look in the mirror and I just don’t like it. Maybe that’s why it’s hitting me so hard, I’m not used to this. I played soccer and hockey as a kid, added wrestling in high school, practiced with the soccer team in college (full disclosure: never saw full action outside of preseason games). I’ve managed to stay active and in sports after graduating, coaching youth and HS teams, playing on competitive teams, and, at the very least, Sunday pick-up games.

Your body ages, and slows down. Has anyone told you hangovers also take longer? I bet no one has ever told you that.

But then it creeps up on you. Age. A couple of weeks off for a toe issue here. A nagging hip injury there, that you rest for a month. A pulled calf that used to take a week, now stretches into next month, and nagging – always nagging. Your body ages, and slows down. Has anyone told you hangovers also take longer? I bet no one has ever told you that.

Then the diet starts to slide. Salad is replaced with fries. Our son loves fries, we always share them. Yes, I will have a milkshake with that!

“Oh my god, Karen, is that your famous pizza dip? I love coming to your parties.”

Did we make sure to grab a couple of bags of chips for the house? You know how the “kids” like those peanut butter puffs. And I don’t think I’m eating that much more now. We used to SHOVEL food back in… oh that’s right, I’m not training five days a week anymore. I’m not even training for two days.

I can complain about my muscles aging. But the food stuff is all self-control really. That’s on me, I know it. It’s just all so delicious! And there’s no one to tell you that you shouldn’t kill off a pint of ice cream. Your wife might, but what does she know anyway. I’m an adult. “Babe, have you tried this Half Baked Ben & Jerry’s?” It’s a best seller for a reason.

The mirror doesn’t help and Social Media will kick you right in your big, fat gut. FIT DADS! Twenty one days to a healthy new you! Cross-fit! Yoga! Spartan races! In the mud? Sure, in the f*cking mud! Let’s go! “I did a marathon this weekend, you guys, and it was so fulfilling!”

And finally, maybe moving to Los Angeles, where there’s no in-between, didn’t help. These dads are either super-fab-fit and in the entertainment industry, or they’re the fat guy, also in the industry. But the chubby dad? That’s not a thing. Was that ever a thing, here? That’s the guy that’s clearly not taking care of himself. “You should try the cross-fit down the street!” Which of the three down the street?

So you get a little depressed with your body image, and you eat a little more. Why yes, I will have some dopamine with my peanut butter puffs, thank you! And your friends are always going on a hike, or to the gym. And where do they find the time? Is it before one of your kids loses his mind in the morning because today, of all days, she doesn’t want to go to school? Or do you go in the evening, after dinner, when you’ve finally fed everyone in the house, and the dishes are washed and put away, and we did bath time and read the same book three times now, and your youngest still refuses to go to bed because “it’s scary”, so you have to fight him from climbing out of the crib because he can do that now. And you’re physically and mentally exhausted. What could be better than gym at 10:30pm to round it all off?

I wish “toddler struggling” was a workout, because you end up sweaty just putting pants on him…

Can I just sit on the couch and stare at the wall? I don’t even care what’s on Netflix, the wall is fine. It is a good shade of peach, that my wife picked out, and it does go better with the couch. I wish “toddler struggling” was a workout, because you end up sweaty just putting pants on him, but it’s not enough. It almost feels like a punishment. I’ve been “Sisyphussed” with fat.

I’m glad some people, some of my very own friends, find the time and the effort, the will, and maybe a gentle touch of narcissism to get out there and work out, and be the best looking version of them that they can. I just don’t. I really don’t seem to have any of that in me. I get caught up in getting everyone ready and fed. Working, talking, errands. Bath time, bed time. And I never make it to the gym. But I should. Not for the whole image thing, but to stay active and healthy. Live longer. Do it for the kids!

And I might. I’d like to focus on finding moments to be active, and eat healthier, and turn this around. I just might… I probably won’t. However! What I will do is stop beating myself up about it. This is it. I am not a ballerina. I’m just a guy that likes working with funny people and talks a lot about astronomy, even when no one else wants to.

What I will also do is enjoy little moments like these with my son. Yeah, it is a pretty big sundae for just the two of us. But we had a blast eating it. I will remember that this particular addition to my waistline was a moment of happiness in the making. 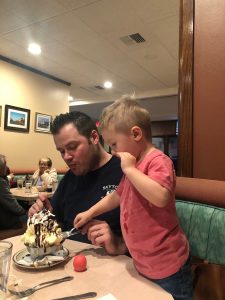 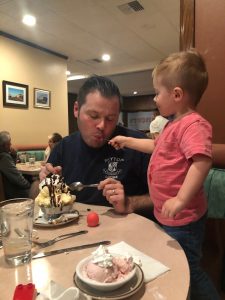 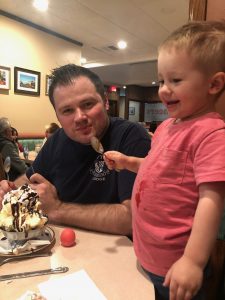 We call it Intermittent Ice Creaming. You should try it!