Ted Mattison is the founder of Ranger Ted, an outdoor guiding and educational company. He is the author of the blog and upcoming book, The Power of Wonder, An Adventure Memoir. Ted is a certified California naturalist, trained in wilderness first aid and is committed to sharing wonder and the great outdoors with people of all ages and abilities.

Originally from Minneapolis and a graduate of Oberlin College, Ted has been a working actor, writer, director, producer, and teacher in Los Angeles for 24 years. As an actor he has appeared in over 90 commercials and scores of television shows including most recently: American Horror Story, Lady Dynamite, Bosch, and Criminal Minds. He is the co-director, producer, and subject of the documentary film about Burning Man, Nothing Without You, winner for Best Documentary, Malibu Film Festival.

He’s canoed, kayaked, backpacked, camped and explored the great outdoors from Minnesota to Alaska to the Cascades and the Sierras. He lives in Huntington Beach with his wife and two young daughters. 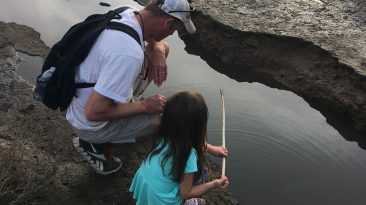